Double Chamber Right Ventricle (DCRV) is a rare Congenital Heart Defect. It was first described around 130 years ago. The clinicians began describing the term extensively from the 1960’s.

DCRV is better understood as a form of separated Right Ventricle (RV) caused by the presence of abnormally located or hypertrophic muscular bands.

The abnormally located muscle bundles divide the Right Ventricle Cavity into a proximal and distal chamber. Those muscle bundles run between an area located in the ventricular septum, beneath the septal leaflet of the Tricuspid Valve, and the anterior wall of the right ventricle. Certain other heart defects are associated with DCRV like Ventricular Septal Defect (VSD), Pulmonary Valve Stenosis and discrete subaortic stenosis. 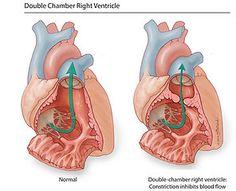 As outlined by Restivo et al, there are several subtypes of divided Right Ventricle.

These are as follows :

Double Chamber Right Ventricle is rarely seen as an isolated Congenital Heart Defect. It is generally seen in 0.5% to 2% of heart defects and in about 10% with Ventricular Septal Defects.

Many patients with DCRV are asymptomatic. The most commonest indicator for referral is a murmur. When a VSD is present , the manifestation is that of  a VSD or Pulmonary Outflow Tract Obstruction.

The doctor may order the following tests for the correct diagnosis :

Patients with DCRV need to undergo open heart surgery. The long term prognosis is good. Some children may require repeat surgeries in future in view of Pulmonary Outflow Tract Obstruction.

We at Genesis Foundation, which is a foundation for critically ill children have seen only two cases of DCRV until now. One such child is M. Aishwarya.

M. Aishwarya, who is only eleven years old, is the second child of Mahalakshmi and Manoj Kumar from Coimbatore in Tamil Nadu. She studies in 6th standard in a private school (at the time this was written). However, about a couple of months back she developed breathlessness. Her parents took her to a physician who detected a murmur. They were referred to GKNM Hospital where an echo test was done, and the diagnosis was Double Chamber Right Ventricle with a VSD. She required open heart surgery and her parents were counselled for the same. Manoj Kumar is an accountant in a private firm with a monthly income of Rs 10,000. Manoj Kumar took a loan of Rs 75,000 for the surgery. The hospital charity raised Rs 21,000 for the same. They also sought financial help from our foundation for critically ill children. The monetary aid was provided with the help of our CSR partner, Pernod Ricard India Foundation. Aishwarya has been operated successfully and has recovered well. She is keen to become a doctor in the future.