Learning About An AP Window – Blog Skip to the content

Learning About An AP Window 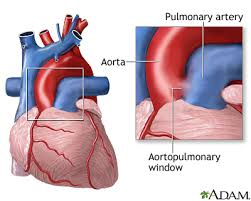 1. Aorta Pulmonary Window (AP)/ Septal Defect is one of the rarest forms of Congenital Heart Defects

2. It develops when there is incomplete separation between the Ascending Aorta and the Pulmonary Artery (great arteries) resulting to a pathway between the two

3. Occurring in isolation or in combination with another type of CHD such as Tetralogy of Fallot, Coarctation of Aorta, Ventricular Septal Defect, Interrupted Aortic Arch, just to name a few

5. There are three types of AP Window – Type I, Type II and Type III

6. Each classification is based on the location of the defect, Type I being the most common

7. This defect was described as an AP Window by John Elliotson, M.D., F.R.C.P., F.R.S. Professor of the Principles & Practice of Medicine, University College London, Senior Physician, University College Hospital in the third decade of the last century

2. In some cases, the hole can be closed in a Cath Lab with devices like that for an Atrial Septal Defect

3. These holes do not close on their own

4. Anti-congestive medicines such as diuretics, and digoxin can provide symptomatic temporary improvement, but should not alter the course of treatment

5. Surgery should be considered at the time of diagnosis

7. The surgery usually involves, separation of the Aorta and the Pulmonary Artery

8. Device closure can be considered when the defect is small without causing stenosis of the Aorta and Pulmonary Artery

We, at Genesis Foundation support children suffering from congenital heart defects, including neonates who require urgent and critical care. Over the years we have been able to support many types of defects that come under CHD and AP window is one of them. Over the last three years, we have supported at least 12 such cases. Second child born to Jaideep and Samruddhi. He was only seven months old when he was brought to the Cardiology Evaluation Unit due to the act that he was found to have had difficulty in breathing and taking his mother’s feed. Unfortunately, his weight gain was also poor and he had long bouts of inconsolable crying. The treating Pediatrician suspected heart disease and hence referred the baby to Jupiter Hospital for evaluation. The cardiology team examined Yash during one of their outreach OPDs at Dombivli, Maharashtra where Dr Srinivasan L performed an Echo. It came as a huge shock for both the family when the diagnosis was pronounced.

Yash was found to have a very complex heart lesion – an AP window (Type I). There was oxygenated blood being recirculated in the lungs, so all the systems in his tiny body had to work over-time just to compensate for this wasted recirculation. This is why his growth had been poor and his mother especially had been greatly concerned. What made things worse that was he had another dreadful complication.

The pumping function of his heart was just 30% which put him in high risk as he required immediate surgery.

Jaideep and Samruddhi were not able to understand the complexity of the lesion and urgency for surgery or the risks involved. To complicate issues further, they had no money to fund such an expensive surgery. Jaideep works as a peon in a private school, his annual income stands at Rs 40,000.

What truly saved the baby’s life was the determination each family member had to see him survive no matter what. Yash was started on medications in the hope that his pumping function would improve and simultaneously the parents were figuring their finances.

Miraculously, his heart function showed an improving trend and had responded well to the medication. At the time of admission, Yash had normal heart function and only needed surgery to close the defect. The surgery was performed on 31st May at Jupiter Hospital by Dr Ashutosh Singh and his team. He had a good recovery post-surgery and was taken off major life-support systems soon after. Ten-months-old, Little Shivay is the only child who was born to his parents. It’s tragic as his mother passed away so his father has been looking after the little boy with support from his parents. Ankit, the father works in a shop in Karnal. He was taken aback when he noticed that Shivay was showing signs of breathing difficulty.
He took him to a nearby local hospital where he was admitted. It was here that he was referred to Max Hospital in Delhi, so he made his way from Karnal. When they reached the boy was taken in for an Echo where a congenital heart defect was detected, that too a complex one – an AP window. He needed to get a device closure in a Cath Lab as he was in a critical state. With a salary of Rs 4000 per month, Ankit could naturally not afford such high medical costs even if it questioned the life of his son, he simply didn’t have the access to so much money. He had asked for his family and friends for support, but no one was in a position to give financial aid.

The hospital reached out to us for support and through our CSR partnership with WPP India CSR Foundation we were able to provide the funds for treatment.

Both children were critical because they were suffering from a congenital heart disorder – in these cases a rare one, an AP window. By getting financial support at the right time, both were operated on and have completely recovered. They are leading normal lives and their families hearts are filled with gratitude for the support we were able to extend.